A noble, dignified-looking hound, the Afghan dog stands proudly and elegantly, with his long, lustrous coat as his crowning glory. A large breed, these adult dogs measure 68 to 74cm in height, with bitches slightly less at 63 to 69cm. The glorious coat comes in all colours – from black to silver, with every colour, pattern and combination in between! An average weight is around 25kg, with an approximate range of 20 to 27kg depending on the dog's sex and build.

I've looked after dogs before, so I have some experience
I'm an experienced trainer and comfortable with any breed
I'd like to go on active walks with my dog
For more than two hours a day
I'd love a large dog
Dog drool? I can tolerate some.
I can fit in daily grooming sessions
-
I love dogs that are chatty and vocal
No
No
No 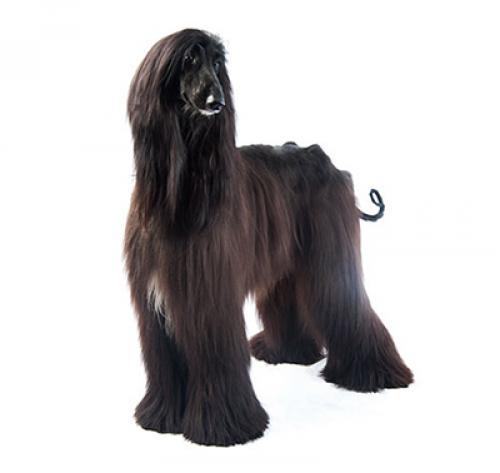 One of the world's most ancient breeds, the Afghan Hound dog breed first came to the attention of the western world in the 19th century. His exact early history is unknown, though legend abounds. Different variations of the breed exist in Afghanistan and they have been used to guard and herd flocks and cattle, as well as to help hunt mountain deer, antelope, hare and even such predators as wolves, jackals and snow leopards!

Often aloof with strangers, early socialisation is a must for this regal dog, as is early puppy training – particularly with recall. With his family and those he knows, there's no hint of standoffishness – he is wonderfully loyal and loving. The Afghan dog is built to run and he is never happier than when sprinting at full speed, the wind in his hair, chasing a ball or a squirrel that he's spotted.

An adult Afghan dog needs considerable exercise (ideally, around two hours a day or more). He loves to run free, but given his tendency to chase and hunt, be sure that his recall is reliable and exercise in safe open areas, well away from traffic.

Large breed dogs benefit from a different balance of nutrients including minerals and vitamins compared to smaller-breed dogs. Afghan Hounds are prone to bloating and stomach problems; smaller, more frequent meals can help minimise this risk

The glamorous, long, silky coat of an Afghan dog comes at a price: it is labour-intensive to keep it in tip-top condition, with daily grooming recommended to prevent tangles and mats, and regular bathing required to keep it clean. Fastidious grooming is especially important when he loses his puppy coat, to avoid the new coat matting with the old, which would cause discomfort.

Afhgan Hounds are elegant dogs, and they love nothing more than to run as fast as possible. Learn about the origin of their breed and their care needs here.