Getting a Puppy | New Puppy | Purina Skip to main content

It’s wonderful that you’re bringing a puppy into your happy, loving home! Once you’ve chosen your perfect breed, the next step is to find a responsible rescue centre or breeder where you can find a puppy to add to your family.

It’s important to carefully consider what breed of dog you would like before taking one home. It can be very easy to be swayed by big brown puppy dog eyes or a fluffy ball of energy, but remember that a dog is a long-term relationship, so it’s best for you and your pet that you’re compatible.

A dog should suit not only your lifestyle, but your surroundings too. For example, if you live in a smaller home with little outside space, then a little dog may suit you better.

As well as breed, age is another important thing to consider when getting a dog. As puppies require a lot of work to train, you may want to ask yourself “would I be better off adopting an adult dog?” if you do not have enough time to dedicate to keeping a cheeky puppy in check!

If you are certain that a puppy is best for you, next comes the fun part – finding your new furry pal!

Buying through a breeder

One option when choosing a puppy is to buy from an owner or breeder. To make sure you find a reputable breeder who will want the best for you and your puppy, The Kennel Club runs an ‘Assured Breeder’ scheme to provide a list of trustworthy breeders who follow guidelines. Breed clubs and societies are also an excellent resource for finding recommended breeders.

Don’t be tempted to buy a puppy from a pet shop, online (without meeting them first) or in other circumstances where the puppy’s history is unclear (e.g. at a car boot sale or from the newspaper), no matter how cute they might appear! These puppies may have come from puppy farms or, worse still, been stolen.

If you’re thinking about buying a puppy from a breeder, you can do some extra homework by reading a publication such as Your Dog, or taking a look at their website www.yourdog.co.uk. Dog shows are also great places to meets breeders and owners, and learn more about the breed that you’re interested in.

Questions to ask a breeder when buying a puppy

Before you go and meet your breeder, give them a call. Any responsible dog breeder will be more than happy to discuss and answer questions about their litter. Some of the questions you might like to ask your breeder include: 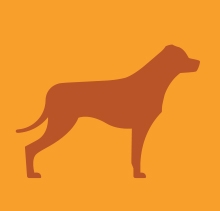 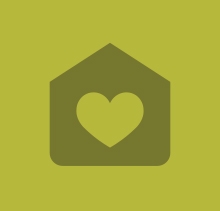 If the breeders are unable, or unwilling, to answer the majority of your questions, consider carefully whether they’re the right people to buy your puppy from.

Don’t be surprised if the breeder asks you as many questions as you ask them. This is a very good sign and shows they are genuinely interested in finding the best homes for their puppies. They want to make sure you’re prepared and that your circumstances are suited to the puppies they have.

Once you feel that you’ve found your ideal breeder, and you’ve both asked each other enough questions to be confident that you’re a match, it’s time to meet face-to-face – and hopefully find the perfect puppy. There are a few things to keep an eye out for during your visit: 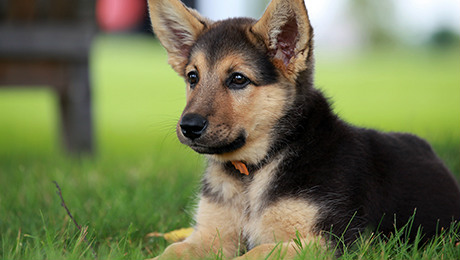 Getting a puppy is extremely exciting and you’ll probably be itching to pick out the perfect new addition for your family. When you’re buying from a breeder, you’ll usually meet the litter for the first time when they’re around six weeks old, and then you can pick which one is perfect for you!

If possible, try to make regular visits so your puppy can become familiar with you. You may even be able to take the whole family along so the puppy becomes used to you all – after all, getting a puppy is a family commitment. Just remember that lots of new people might be overwhelming for the little pup so, if you’re a big family, perhaps don’t all visit at once. After your visit, you could leave behind a piece of clothing to give your puppy a chance to get used to your scent.

Things to look out for in your puppy

By six weeks old your puppy should be interested in you and their environment, keen to sniff your hands and explore the world around them. They should be playful and almost certainly up to mischief!

Bear in mind that the smallest puppies in the litter can have health problems, and that nervous, withdrawn or overly excitable puppies may need more training and socialisation. 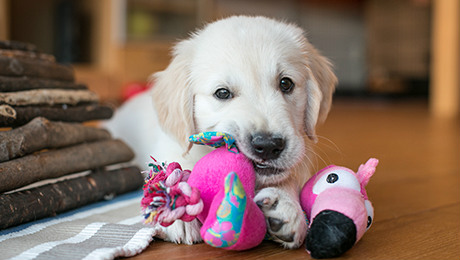 Your puppy should be plump, but not fat, and be free of any lumps or bumps. The perfect puppy should also have clean and bright eyes, clean ears and a clean bottom. Coats should be soft and clean with no bald or sore patches and the puppy shouldn’t be scratching.

Place your potential pup on the floor. They should be interested in their surroundings straight away. Clap your hands, or make a high-pitched squeak and notice how they respond. Deafness can be a problem in some breeds, like Dalmatians and other white breeds, so make sure your puppy reacts when exposed to obvious sudden noises.

The time that your puppy spends with its mother and brothers and sisters is crucial. It's when they learn how to be a dog, and the time when they develop essential socialising skills from their mum and siblings.

As a general rule of thumb you should plan to pick up your pup from around eight weeks old (or a little later with certain breeds). Earlier re-homing isn’t recommended and it may be a sign that the breeder isn’t following high breeding standards. It's worth noting that some insurance policies don't cover dogs that leave the breeder before eight weeks of age.

Sometimes a breeder will ask you to wait until 12 weeks to pick up your puppy. If that’s the case, check that it’s going to be a busy household where your new pup can be well socialised during those all-important weeks.

The time you take your pup home will also influence what vaccinations they will have received - so check with the breeder, who should provide documentation of vaccinations (along with worming and other treatments).

If after choosing a puppy you are asked to collect them much later than the usual 8-12 week period, there may be a reason why the breeder has held them back - so ask why.

Finally, make sure you’re familiar with what food your pup’s been fed on and the breeder’s feeding regime. It helps your puppy settle in if you can continue this at home, at least initially. 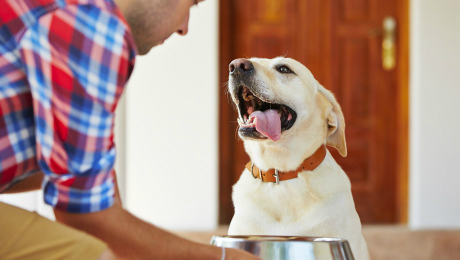 Don’t forget that there is an alternative to buying a puppy from a breeder. There are lots of puppies that have been abandoned or, for whatever reason, are in need of a new loving home. You may decide you want to look for a puppy at an animal shelter or rescue centre across the country.

A good rescue centre will have clean and homely pens, with a warm, sheltered area for sleeping, plenty of exercise space and toys. Staff at good centres will spend time with the puppies to ensure their puppies are well socialised and will be a friendly addition to your family. Advisers at the centre should always be more than happy to offer help on how to buy a puppy if you’re a first time dog owner.

For more information about rehoming a dog in your area, contact one of the larger, national organisations, such as Dogs Trust, The Blue Cross, Battersea Dogs Home, RSPCA, Scottish SPCA or Dublin SPCA.

Our page on adopting a dog should also answer any question you have about rehoming a puppy.

Whether you buy or adopt your puppy, you have a wonderful future of exciting adventures ahead! 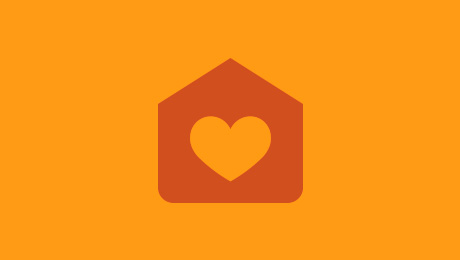 If you’d like more information on finding your perfect puppy or have any other queries, contact our PETCARE EXPERT TEAM

Sports and Activities to Try with Your Puppy

Brain Games and Puzzles to Play with Your Puppy