The Tervueren is a medium-sized, long-haired dog that appears square in its outline. Although they are often confused with the 'long-haired German Shepherd Dog' by the general public, they are squarer in profile; lighter in bone with a more refined head. The Terveuren dog breed is fawn, red or grey in colour with black shading on the hair tips. Adult dogs should measure between 61-66cm and females 56-61cm. They weigh between 27.5-28.5kg.

Yes. I'm a confident owner with lots of experience
I'm an experienced trainer and comfortable with any breed
I'd like to keep super fit together with vigorous walks
For more than two hours a day
I'd love a large dog
Dog drool? As little as possible, please!
I can groom my dog once a week
-
I love dogs that are chatty and vocal
Yes - Barks and alerts
No
No 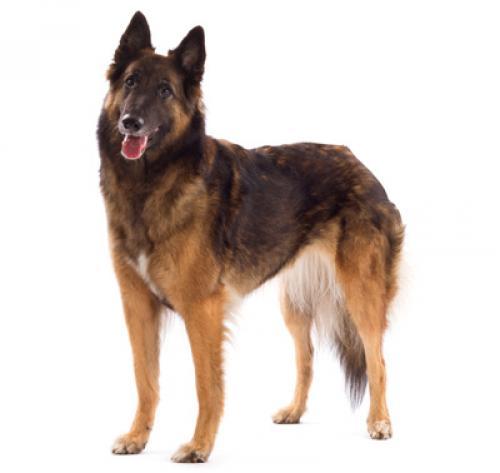 The Belgian Shepherd Dog comes in four varieties: the Laekenois, Tervueren, Groenendael and Malinois, named after the areas in Belgium from which they came. The Tervueren is closer to the Groenendael than the other two. It is believed that two 'black-tipped fawn long-haired' sheepdogs were crossed and one of the resulting litter was crossed to the foundation stock of the Groenendael. This litter became the precedent of the Tervueren. In the 1940s the Tervueren dog breed nearly disappeared altogether; however, in the 1950s interest was rekindled in the breed.

The Tervueren is an affectionate, devoted companion who will protect his home and family. As with all breeds with a guarding tendency, it is not advisable to encourage the guarding instincts when young, as they could start trying to guard you in inappropriate situations. Their natural guarding instincts will kick in if and when necessary. However, he has a great sense of humour and learns very quickly.

As with many breeds, all varieties of the Belgian can suffer from hereditary eye disorders and hip dysplasia (a condition that can lead to mobility problems). Eye testing and hip scoring of dogs prior to breeding is therefore important. This particular type of Belgian Shepherd is also predisposed to epilepsy.

The Tervueren needs two hours-plus of daily exercise and mental stimulation. Highly trainable, he can excel at agility, obedience and other canine sports. They are very active dogs and should not be considered as pets if they are to be left alone all day.

The Tervueren is a long-haired dog that needs a fair amount of grooming. They have a long, straight and profuse outercoat with an extremely dense undercoat. This undercoat is shed twice a year in the case of bitches and in males, generally once a year.

A medium-sized dog, Tervueren Shepherd Dogs are quick learners and love nothing more than playing and being active. Learn more about them with Purina.