A large spitz-type dog, with a broad chest, thick coat, large bushy tail (that can be carried over the back) and erect ears, this is a striking, powerful dog that comes in black and white, grey and white, red and white, sable and white, and white and black. Males stand at 58-70cm and weigh 30-40kg when fully grown and females are 50-60cm tall and weigh 18-30kg.

Yes. I'm a confident owner with lots of experience
I'm an experienced trainer and comfortable with any breed
I'd like to go on active walks with my dog
For more than two hours a day
I'd love a large dog
-
I can fit in daily grooming sessions
-
Very vocal
Yes - Barks and alerts
No
No 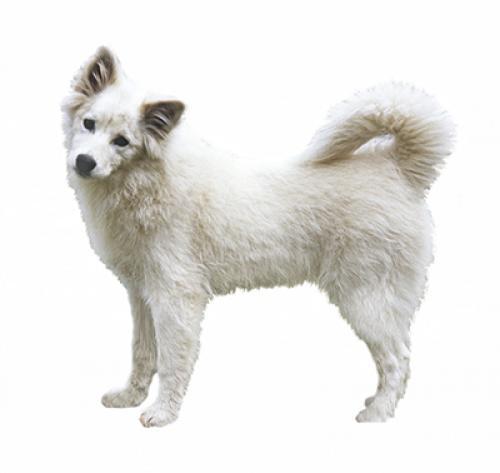 The Canadian Eskimo dog breed worked with Inuit hunters to find seal breathing holes and hold large predators at bay, such as polar bears. It was also used as a sled dog. It is said there were 20,000 Canadian Eskimo dogs in its native homeland in the 1920s, but in just 50 years, with the development of the snowmobile, this number dropped to just 200, as sled dogs were simply no longer needed. A dedicated breeder set out to save the breed, but the Canadian Eskimo dog remains quite a rarity outside of Canada.

The Canadian Eskimo dog is very much a specialist working breed rather than an average pet dog. Bred to pull weights of up to 80kg over 70 miles a day in the harshest of Arctic conditions, he does not thrive in an ordinary domestic set-up! Pack-orientated, he is nevertheless affectionate to people and is playful, curious and vocal.

The Canadian Eskimo dog needs a great deal of exercise to fulfil his needs – at least two hours of daily exercise. An energetic hobby such as sled-racing is a must, though warm-weather energetic exercise should be avoided because of the possibility of heat exhaustion.

The warm, weatherproof coat comprises a thick undercoat and a top coat that is 8-15cm long. Male dogs have thicker, longer hair (a mane) around the neck and shoulders. The coat needs brushing about twice a week, but daily brushing will be needed when the coat sheds heavily.

Bred as both hunting and sled dogs, the Canadian Eskimo breed is large, robust, and full of stamina. Learn more about these thick-coated dogs here.