The Miniature Long Haired Dachshund dog breed is a long-backed, short-legged dog of diminutive height. While small, the Dachshund is still muscular and powerfully built with a deep, broad chest and well-developed forelegs. He has an attractive soft, straight coat that comes in a range of colours (see the breed standard for full details). The adult Miniature Dachshund weighs 4.5-5kg and is approximately 12-15cm in height.

I've looked after dogs before, so I have some experience
I'm happy with breeds that may need some training
I'm looking for a dog to take on gentle walks
For half an hour a day
I'd like a little toy dog to carry around
Dog drool? As little as possible, please!
I've got time for grooming every other day
-
Very vocal
Yes - Barks and alerts
No
No 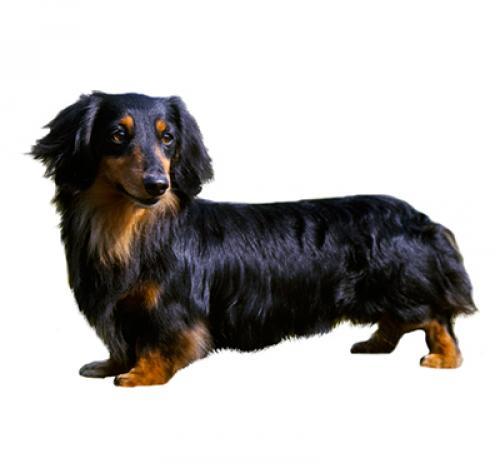 Dachshunds can be traced back to 15th century Germany. However, Dachshund-type dogs have appeared in ancient Egyptian and Mexican art and remains of a similar dog were found with shipwreck remnants in Italy, dating back to the 1st century AD. The German breed standard was set in 1879 and the breed club established in 1888. Dachshunds were exported to Great Britain with Prince Albert and became popular in Britain and America throughout the 19th century. Miniature Dachshunds were used in lieu of ferrets to get rabbits out of their warrens.

The Miniature Long Haired Dachshund breed can be very independent and needs kind, consistent, patient training. Early socialisation is required in order to acclimate Dachshunds to children, strangers and other animals. They are a breed that becomes quite attached to their family and usually one family member in particular, but they can be reserved with strangers. Of the three coat varieties, Miniature Long Haired Dachshunds tend to be the friendliest.

This dog needs a minimum of half an hour's daily exercise. Before letting him off-lead, do ensure his recall is reliable, as his hunting instincts can drive him to run off in pursuit of a scent or quarry. Bear in mind that Miniature Long Haired Dachshunds were bred to 'go to ground' and can dig under many types of fencing, so check your garden's security.

Miniature Long Haired Dachshunds should be completely brushed and combed at least once a week. The extra hair between their pads should be trimmed as needed. Special attention should be paid to keeping the ears clean as drop eared dogs are more likely to develop ear infection. Although a dainty eater, a long coated Dachshund can sometimes get food on their long ears, so these may need additional cleansing.

Small but strong, with a long, soft coat that comes in a range of colours, these small Dachshunds make loyal pets with the right training. Learn more here.