This is a long-backed, short-legged dog of diminutive height. While small, the Wire Haired Dachshund breed is still muscular and powerfully built with a deep, broad chest and well-developed forelegs. He has a short, harsh coat with bushy eyebrows and a beard. The coat comes in a range of colours (see the breed standard for full details). The adult Dachshund weighs 9-12kg and measures around 35cm.

I've looked after dogs before, so I have some experience
I'm happy with breeds that may need some training
I'm looking for a dog to take on gentle walks
For an hour a day
A smaller dog would suit me best
Dog drool? As little as possible, please!
I can groom my dog once a week
-
Very vocal
Yes - Barks and alerts
No
No 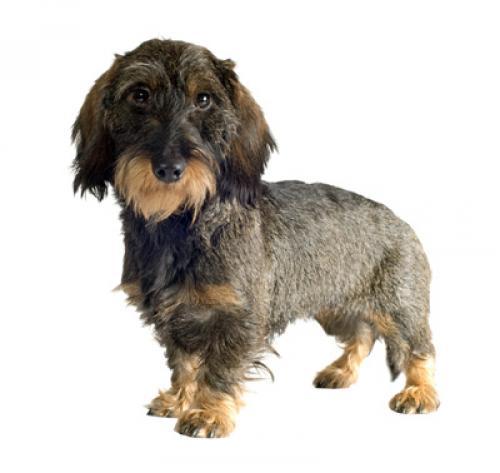 Dachshunds can be traced back to 15th century Germany. However, Dachshund-type dogs have appeared in ancient Egyptian and Mexican art and remains of a similar dog were found with shipwreck remnants in Italy, dating back to the 1st century AD. The German breed standard was set in 1879 and the breed club established in 1888. Dachshunds were exported to Great Britain with Prince Albert and became popular in Britain and America throughout the 19th century. Standard Dachshunds were used to hunt badgers primarily but have been used with other game.

The Wire Haired Dachshund can be very independent and needs kind, consistent, patient training. Early socialisation is required in order to acclimate Dachshunds to children, strangers and other animals. They are a breed that becomes quite attached to their family and usually one family member in particular, but they can be reserved with strangers.

The most common health problem seen in the Wire Haired Dachshund is related to their body shape, making them prone to spinal disorders. Heart disease is also relatively common in the breed. As with many other breeds, various inherited eye disorders can be seen, and breeding dogs should be routinely eye tested.

Wire Haired Dachshunds need their coats plucked two to three times a year. The facial furnishing should be combed out at least once a week and will need the occasional trimming. It is best to let an experienced groomer pluck the coat unless the breeder can teach a new owner how to do it. Make sure the coat is plucked/stripped and not clipped. Clipping will ruin the texture of the coat.

With a wiry coat, busy eyebrows and beard, Wire Haired Dachshunds are distinctive-looking and independent dogs. Read about their care here.