Greyhounds are the racehorses of the canine world, incredibly fast, graceful and elegant. These dogs are muscular and strongly-built. The short, fine coat comes in black, white, red, blue, fawn, fallow, brindle or any of these colours with white. Adult dogs are 71-76 in height and weigh about 30-32kg; adult females are 69-71cm and 27-30kg.

I've looked after dogs before, so I have some experience
I'm happy with breeds that may need some training
I'd like to go on active walks with my dog
For an hour a day
I'd love a large dog
Dog drool? As little as possible, please!
I can groom my dog once a week
-
I prefer quiet dogs that only bark from time to time
No
No
Yes 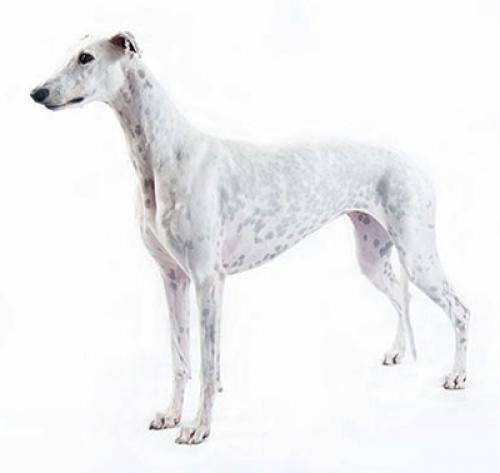 Greyhounds were among the most favoured of all dogs; Pharoahs and other Asian and African leaders had images of their dogs engraved into their tombs, dating back to 4,000BC. They were used for coursing antelopes, wolves and deer, and became extremely popular, spreading through the Near East and Europe, eventually arriving in Britain where they became a status symbol, so much so that in 1016 only the elite were allowed to own a Greyhound dog breed. They were used in coursing hares, and later track racing took over, which again proved them to be the fastest dogs on earth: only the cheetah can beat them for speed in the animal world!

These dogs are calm and social indoors and can even be rather lazy. They are sensitive dogs who can make ideal family pets if given the right owners! While they are gentle by nature, their natural hunting instinct is always present and owners must be willing to take on the necessary responsibilities that go with the breed. Greyhounds are affectionate with their families, though usually aloof with strangers. They normally get on well with other dogs in the household but cat owners should exercise extreme caution.

Although Greyhounds are the most athletic of all domestic dogs, they do not need copious amounts of exercise. Two 20-minute runs a day will usually suffice. They are known as the 40mph couch potatoes – needing a good, fast sprint, not miles of walking. A reliable recall is essential before they are let off the lead in public areas because of their chase instinct and they may need to be muzzled to protect the small animal population. Note: a warm coat may be needed in cold weather.

Large breed dogs, as well as having large appetites, benefit from a different balance of nutrients including minerals and vitamins compared to smaller-breed dogs. Greyhounds are prone to bloating and stomach problems; smaller, more frequent meals can help minimise this risk.

One of the easiest breeds to look after with regard to their coats, the short, fine coat needs just an occasional brush over.

Extremely fast, with an athletic body and noble stance, Greyhounds are known as the 'racehorses of the canine world'. Read about this incredible breed here.