The Japanese Chin is a dainty toy dog, with adults weighing in at 1.8-3.2kg and standing 20-27cm in height. Elegant and aristocratic-looking, he has an abundant, long, straight coat that is soft and silky. The coat comes in black and white, or red and white.

No, this will be my first dog and I am ready to learn!
I'd feel more comfortable keeping training to the basics
I'm looking for a dog to take on gentle walks
For half an hour a day
I'd like a little toy dog to carry around
Dog drool? I can tolerate some.
I've got time for grooming every other day
-
I prefer quiet dogs that only bark from time to time
Yes - Barks and alerts
Yes
Yes 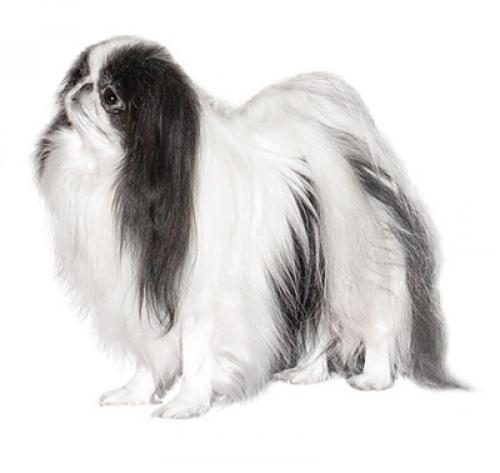 The ancient Japanese Chin dog breed is thought to have originated in China, probably arriving in Japan as a gift to the Emperor from the Chinese royal court. As companion dogs, they were bred small so as to fit in the kimono sleeves of the royal and noble ladies. Some dogs were given as gifts to royal ambassadors, and Portuguese sailors may have introduced some Japanese Chin to Europe in the 17th century, but it was the mid- to late-19th century before they began to appear in any number, quickly becoming highly sought after.

Bred to be a companion for centuries, the Japanese Chin is a happy, gentle, affectionate little dog that thrives in human company and hates to be left alone for too long. He loves children but because of his size, he is best suited to a home with older children where there is no danger of him being injured accidentally.

The flat face of the Japanese Chin means he may be more prone to breathing problems. Over-exerertion and over-heating is therefore to be avoided. Like many small breeds, they can suffer from kneecaps that may temporarily slip out of place (luxating patellas).

The Japanese Chin doesn't need very much daily exercise, given his size – about half an hour a day will suffice. Do not exercise him in very warm temperatures, as he may develop breathing difficulties, due to his flattened nose/face. Instead walk him in the cool early morning or evening.

The Japanese Chin's long coat needs brushing two or three times a week, to keep it tangle-free. Make sure the corners of the eyes are kept clean, wiping them with some damp cotton wool if necessary. Interestingly, 'Chin' means 'cat-like' and these dogs often clean their faces with their paws, as a feline would.

Japanese Chins are elegant Toy dogs with a flowing coat and a gentle nature; they also enjoy human companionship and attention. Find out more with Purina.