The Bull Terrier is a strongly built, deep-chested muscular dog. They have a long, strong, egg-shaped head with a Roman nose. The most usual colour for this breed is white, often with a coloured marking on the head or sometimes on the back. They can also be black, brindle, red, fawn or tricolour. Adults are about 45cm in height and 33kg in weight.

Yes. I'm a confident owner with lots of experience
I'm an experienced trainer and comfortable with any breed
I'd like to go on active walks with my dog
For an hour a day
A medium size dog works for me
Dog drool? As little as possible, please!
I can groom my dog once a week
-
I prefer quiet dogs that only bark from time to time
Yes - Barks and alerts
No
Yes 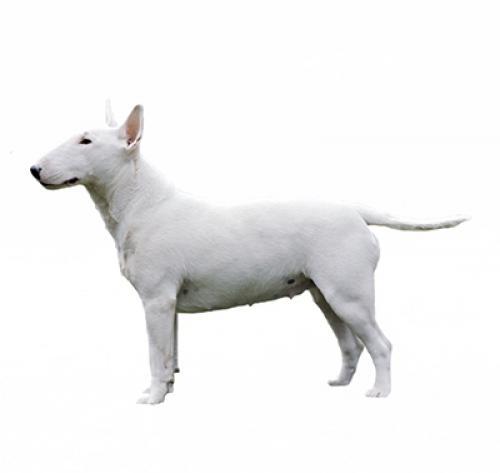 Bred by crossing a bulldog with a terrier, this dog was produced to fight to the death in the bloody sport of bull baiting. They are now one of the most popular dogs in Britain, and have proved to be an impeccable guard dog. The Miniature Bull Terrier breed has existed for as long as the Standard, and was recognised as a separate breed by the British Kennel Club in 1939.

Bull Terriers are friendly dogs with a seemingly wonderful sense of humour. They can be obstinate and are not ideal dogs for the first-time owner. As a breed they are generally placid, but it has to be remembered that they were originally bred as fighting dogs and will react if challenged, but they will not normally make the first move. They are very affectionate dogs and love company, so it is not a good idea to leave them alone for long periods of time as with their strong jaws they can cause lots of damage if bored.

Bull Terriers are an active breed that require a fair amount of exercise, both free running and roadwork. An hour's daily exercise should be considered a minimum, though this breed will happily accept more!

The Bull Terrier is an easy breed to groom. Their shorthaired coats can be groomed using a rubber-grooming mitt about once a week to remove dead hair.

Bull Terriers were originally bred as fighting dogs, but as pets they're usually placid, friendly and affectionate. Read more about this popular breed here.