The Standard Long Haired Dachshund dog breed is short – but not small! He is a medium-sized hound on short legs, standing at about 35cm and weighing 9-12kg when fully grown. He has an attractive soft, straight coat that comes in a range of colours (see the breed standard for full details).

I've looked after dogs before, so I have some experience
I'm happy with breeds that may need some training
I'm looking for a dog to take on gentle walks
For an hour a day
A smaller dog would suit me best
Dog drool? As little as possible, please!
I've got time for grooming every other day
-
Very vocal
Yes - Barks and alerts
No
No 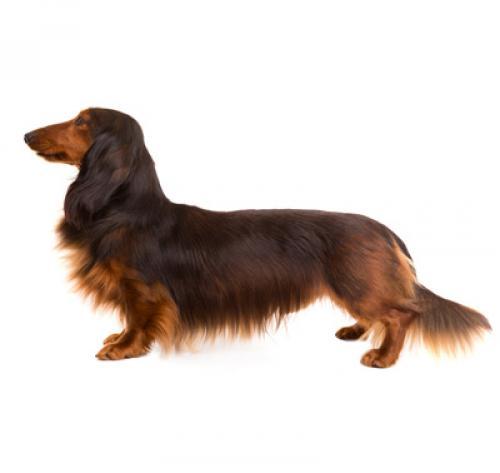 Dachshunds can be directly traced back to the 15th century in Germany, although similar dogs have appeared in ancient Egyptian and Mexican art. The German breed standard was set in 1879 and the breed club established in 1888. Dachshunds came to Great Britain with Prince Albert and became popular in Britain and America throughout the 19th century but lost popularity during World War I due to its Germanic origins. However, prejudices have been set aside and the dog is again a favourite family pet and hunting companion. Standard Dachshunds were used to hunt badgers primarily but have been used with other game.

The Long Haired Dachshund breed is a lively, bold, courageous dog. He can have an obstinate, independent streak but the Long Haired is often said to be calmer and more obedient than the other two coat varieties (Smooth and Wire). He has a good nose and enjoys tracking scents when outdoors, but he is also a great housedog, known for being good-tempered and loyal. The Long Haired Dachshund loves people and makes a rewarding, affectionate companion.

The Long Haired Dachshund needs about an hour's exercise a day. Do ensure his recall is reliable before he's exercised off-lead. When he's in the great outdoors, following a scent, his true hound nature comes to the fore and he loves nothing better than investigating rabbit holes and getting thoroughly mucky!

Your dog's diet needs to have the right balance of all the main nutrient groups including a constant supply of fresh water. It's also important to conduct regular body condition scores to ensure you keep your dog in ideal shape and remember to feed him at least twice daily and in accordance with the feeding guidelines of his particular food. Ensuring the Dachshund is not allowed to become overweight is crucial, as excess weight can put pressure on his back.

The soft, straight coat is longer on the chest, tummy, tail, and back of the legs – areas that are more susceptible to tangling if not thoroughly groomed at least three times a week. Being low to the ground, the coat can sweep up all sort of debris on walks, so check it when you return home.

A popular family pet, Dachshunds are independent and bold but good-tempered - and this type has a lovely soft, straight coat. Learn more about the breed here.