German Shepherd Dogs are one of the most easily recognised breeds in the world. Their appearance should be of a muscular, alert dog with a noble and aloof attitude. The dogs are agile and well balanced and carry themselves with pride. Their coats come in a range of colours (see the breed standard) and consist of a hard, coarse and flat topcoat with a thick undercoat. The ideal height for adult males is 63cm and for females 58cm. The weight range is 30-36kg.

Yes. I'm a confident owner with lots of experience
I'm an experienced trainer and comfortable with any breed
I'd like to keep super fit together with vigorous walks
For more than two hours a day
I'd love a large dog
Dog drool? I can tolerate some.
I can fit in daily grooming sessions
-
Very vocal
Yes - Physically protective
No
No 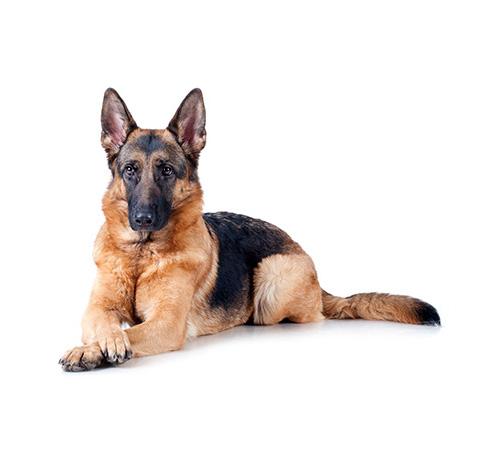 Formed from a variety of different shepherd dogs, the German Shepherd dog breed was originally bred for herding and can trace its origins back to the 7th century. German Shepherd dogs (GSDs) were first shown in 1882, and in 1899, the Verein fur Deutsche Schaferhunde, which is the German breed club for GSDs, was formed. It was through this club that GSDs were developed for use with the police and armed forces, thus saving the breed from extinction during the difficult times at the beginning of the 20th century. During World War I the Germans used German Shepherds as messenger dogs and to locate the wounded. Allied soldiers admired the dogs' intelligence and courage and brought many of them home after the war, thus establishing the breed in other countries.

The German Shepherd will develop a very close bond with his handler and will want to be with him/her as much as possible. Although this breed does need a lot of attention, he will give back one hundred fold with loyalty and incorruptible guarding skills. On the other hand, if you do not take the time to socialise and train a GSD, there will be problems with self-confidence and unruliness. This dog is eager to learn and very responsive to training so he should prove to be a stellar pupil in training classes.

The German Shepherd dog is predisposed to a number of problems including gastrointestinal diseases, a specific stomach condition (gastric dilation volvulus), a disease of the spinal cord and epilepsy. As with many other breeds, they can also suffer from hip and elbow dysplasia (joint conditions that can be painful and lead to mobility problems). Hip scoring of dogs prior to breeding is therefore important.

The young pup should be exercised with some discretion to avoid long-term damage to still soft and forming joints. A fit adult German Shepherd will need two-plus hours of daily exercise along with plenty of opportunities to use his intelligence with training and brain games.

Large breed dogs, as well as having large appetites, benefit from a different balance of nutrients including minerals and vitamins compared to smaller-breed dogs. The German Shepherd dog can be prone to bloating and stomach problems; smaller, more frequent meals can help minimise this risk.

Grooming should be done several times a week, with a vigorous brushing to remove any dead or loose hairs. If it is a longhaired German Shepherd dog, combing will also be necessary. No trimming is required and bathing should only be done as needed. This is a shedding dog but the more you groom him, the less he will shed.

The instantly recognisable German Shepherd is popular for a reason. Loyal, friendly, and responsive to training, they make great pets. Read about them here.