The Japanese Bobtail cat has elegant lines and well-developed musculature. The head is finely chiselled with large upright ears and large round eyes set at a pronounced slant. The tail, when carried normally, only extends about 5 to 8 cm. When the cat is relaxed the tail is carried upright. The hair on the tail is generally thicker and longer than elsewhere and grows in all directions to create the effect of a pom-pom or bunny tail. Japanese Bobtail cats can be long- or shorthaired. The coat is soft and silky and comes in many colours. The preferred colour in Japan is the tri-colour, or tortie and white (known as Mi-ke), a mixture of black, red and white, which symbolises luck -this colouring is usually found only in females.

I'd like a cat that's playful and curious.
That is sociable and dependent
A cat that is very talkative
I'd like a lean and elegant breed
I've got time for grooming my cat every day
-
My cat will have limited access to out-door space
No 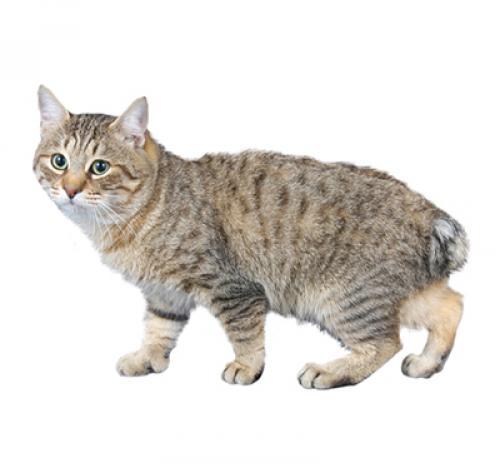 The unique feature of the Japanese Bobtail cat is its tail. When the cat is relaxed and natural the tail looks like that of a rabbit, but it can be unfurled to a length of about 10 to 12 cm. In Japan, the breed can be traced back to the 8th century but it was not seen outside Japan until the 1960s when the shorthaired Japanese Bobtail cats were imported into America. The Japanese Bobtail cat has established a following in America and it is now a recognised breed and is widely shown in the USA. There are not many in the UK.

The Japanese Bobtail cat is friendly and intelligent. The breed is said to have a sweet nature and get on with most other animals and love human company. Some can learn tricks and do need to be kept amused and stimulated. It is a fairly talkative breed.

In America, the Japanese Bobtail cat is known as a robust and healthy breed that lives well into its teens. This cannot be confirmed or denied in the UK population because of low numbers of the breed in this country. It is said not to have the same problems as other tailless breeds such as the Manx because it is a different gene mutation. However, not enough information is available on this yet.

Every cat is unique and each has their own particular likes, dislikes, and needs when it comes to food.  However, cats are carnivores and every cat must obtain 41 different and specific nutrients from their food. The proportion of these nutrients will vary depending on age, lifestyle and overall health, so it's not surprising that a growing, energetic kitten needs a different balance of nutrients in her diet than a less active senior cat. Other considerations to bear in mind are feeding the right quantity of food to maintain 'ideal body condition' in accordance with feeding guidelines and catering to individual preference regarding wet or dry food recipes.

The Japanese Bobtail cat requires no special grooming as its coat is easily kept in good condition by its own grooming. The longhaired version needs a little more effort. However, both will enjoy the attention they get from a groom with a soft brush. As with all cats, regular vaccination and parasite control is recommended.

While this breed is not widely recognized as best breed for children, it can still….[We need a text here]

With a tail like a pom-pom and a silky soft coat, the longhaired Japanese Bobtail has extremely striking features. Discover how this cat breed makes a great pet!