Many of the cats you see out and about are affectionately known as ‘moggies’, which simply means a non-pedigree cat. Friendly, attractive, and full of curiosity, they’re probably the most common type of feline friend to have.

The British Shorthair cat breed originates from ordinary domestic cats and comes in a wide range of colours and coat patterns, from white to black to silver tabby. People began to breed this type in the 19th century to ensure the cats' distinct qualities were preserved, until eventually the British Shorthair was recognised as a pedigree breed.

A touch of Persian and Oriental was added to revive the breed when it came close to dying out in the mid-20th century. The British Shorthair cat breed is sturdy and healthy with a strong, muscular body on short legs. These cats have a round face, lovely large eyes and a thick, short coat.

Like the Persian, these types of cats can be independent and undemanding, happily spending a lot of time outdoors, but they will enjoy a good cuddle if it's on offer from their loving owner!

Other British cat breeds include the Manx and Selkirk Rex. 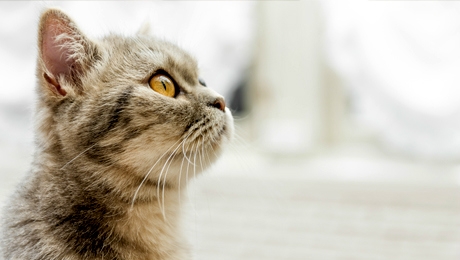 This is a cat breed that likes to make its presence felt! Vocal (but not as loud as the Siamese), the Burmese are often called the 'dog cat' because of their assertiveness, canine-like loyalty to their owners, and willingness to play retrieving games! They love joining in with whatever you're doing - this is very much a 'sit-on-the-newspaper-if-your-owner-is-trying-to-read-it' type of cat! The Burmese is medium-sized with a sturdy body, rounded chest, round head and large eyes with a slightly Siamese-type slant about them. They also have a soft, short, velvety coat that can come in a variety of colours.

The cat breeds in this group have little in common with each other except for their outgoing, larger-than-life personalities! From the unusual and wild-looking Bengal, created by breeding a domestic cat with an Asian Leopard Cat, through to the impish-looking Devon Rex, this is a very diverse group of cat types. It includes the longhaired Tiffanie, the curly-coated Cornish and the Devon Rex. Even size differences are noticeable - from the large Bengal through to the tiny Singapura. They come from all corners of the earth including England, Russia, the Far East and Africa, and some (such as the Ocicat) have been bred by crossing or adapting existing breeds.

Foreign cat breeds are generally 'people' cats. Active and demanding, they are the types of cat that will nag you to bits when they want to eat, play or cuddle - and they refuse to be ignored!

Oriental cats come in two types: the shorthair and the longhair. The short-coated type is best described as a coloured Siamese without the pointed markings (which means the cat's extremities, i.e. their legs, tail, face and ears, are a darker colour than their body). The long-coated variety is called the Angora. A cat of the Oriental cat breed often has similar physical and character traits as the Siamese, although only the white variety has striking blue eyes; other coloured cats of this breed have yellow or green eyes.

The Persian is the real glamour-puss of the cat world. One of the oldest known breeds of pedigree cat, their crowning glory is their long, thick luxurious coat that can grow up to six inches in length!

The Persian shape is 'cobby', meaning they have quite short legs, a short neck and a broad chest. The brush-like tail is magnificently thick, and they even have a ruff of hair as a mane. Needless to say, with such a thick undercoat and a long topcoat, the Persian needs extensive grooming - at least 20 minutes every day. Their eyes also need attention, as they can be prone to weeping. With so many colours and patterns, there really is a Persian cat breed for everyone!

The Persian character is typically laidback and calm. They make great house cats and love snoozing, which is ideal if you work full-time. However, to stop them becoming lonely during the day, another Persian is essential as a companion to play with or to cuddle up to.

This group contains six cat breeds which vary a great deal in looks and character, but which all share a similar, long (but not as long as a Persian) coat.

The Birman has a thick, silky coat, a luxurious tail and piercing, round blue eyes. The coat comes in lots of colours and daily grooming is essential. It's also pointed, but because the paws aren't, it looks as if the cat is wearing mittens! With a long but sturdy body, Birmans aren't as stocky as Persians and some claim they have Siamese in the breed. Character-wise, the Birman is playful, friendly and relaxed. These types of cats are very loving and will often demand attention when they want a fuss made of them!

This is a large, tough, handsome cat breed that has had to withstand the cold winters of Maine on America's east coast - hence the long, thick and weatherproof coat. They have a ruff around their neck and inbuilt earmuffs - hairy ears - to protect them. Their brush-like tail resembles that of a racoon (hence the Coon part of the name). Elegant, well proportioned, athletic and powerful, this cat breed needs lots of stimulation and their chief love is the great outdoors. They make supreme hunters and are rarely put off by the cold and wet; the British weather is nothing compared to what their ancestors were bred to cope with! Maine Coons are unlikely to thrive as full-time house cats, but they like spending time with their owners and make loving, playful pets that are often highly trainable.

Similar to the Maine Coon, the Norwegian Forest cat breed is another born survivor, this time from the hostile climate of northern Scandinavia. Big and strong, with particularly powerful (and long) hind legs, they are very elegant types of cats, as well as being considered quite attractive. This particular breed is built for climbing and, as the name suggests, they love scaling trees! A big indoor cat tree is a must (especially to divert them from climbing your curtains and wardrobes). A great lover of outdoor life, the Norwegian Forest Cat also loves human companionship indoors.

Originally created by crossing a female white Persian with a Birman male, the stunning Ragdoll is a gentle giant - large, heavy, but extremely placid. They have full cheeks, large, oval eyes and a short neck. Despite their large size, they are very delicate-looking in appearance. The name comes from their occasional habit of being so relaxed when picked up that they become floppy - like a rag doll. Quiet and extremely affectionate, the Ragdoll cat breed can make a very good house cat, often less interested in hunting as some of the more robust, outdoor-type breeds.

This is the long-haired variety of the Abyssinian cat. The coat isn't quite as long as other types of cats in this category, but a distinctively 'ticked' (where each hair has two or three bands of colour), a particularly striking physical feature. The Somali cat breed also has relatively large ears - a feature often found in cats that originate from a hot climate, as it helps them to lose heat. Like the Abyssinian, the Somali is intelligent, quite demanding and very people-orientated. Although they look like wild cats and enjoy the stimulation of being outdoors, they also love their home comforts.

The Turkish Van is another large cat breed, both long and muscular. Their semi-long silky coats lack an undercoat, but the Van is very glamorous and sleek nevertheless. Their coat markings are very distinctive - the base colour is a chalky-white, with coloured markings on and around the ears and tail. And their big claim to fame is a love of swimming! Originating from the Lake Van area of Turkey, this cat breed still has a great affinity for being in water and will seek out lakes and ponds to swim in. Turkish Vans love to play with a running tap even more than most cats. They are resourceful and tough, but loving to people.

An ancient breed of cat, the Siamese is one of the most elegant of them all. They have a long, svelte body, powerful hind legs and piercing blue eyes. Like the Persian cat breed, the Siamese cat breed has changed quite dramatically over the years. The head is now more triangular, the eyes more slanted, the ears larger and the body smaller and more athletic. The Siamese coat is 'pointed', with the extremities shaded darker than the rest of the body, notably on the legs and feet, face and ears, and tail. The coat is short and silky, with little undercoat. Although they require little grooming, the Siamese really are full-time cats which usually love people and demand lots of attention. Strong-willed and highly intelligent, Siamese cats know how to take up your time!

Ready for a cat but not sure what is the right breed for you and your family? Great news! Our Cat Breed Library can help you understand the different breeds and help you decide which type of cat could be your perfect pet.

If you’d like more information on different cat breeds or have any other queries, contact our PETCARE EXPERT TEAM

Why Adopt an Older Cat?

Should I Get a Cat or Dog?

Choosing the Right Cat for You
How do I adopt or rescue a cat?
Getting a cat
01
EVCİL Hayvanlar